Expected value trees allow you to design custom Poker scenarios with up to 10 players and all the available boards and actions that can occur in a Texas Hold'em Game. It is also possible to create random boards.

Within the "EV Trees" view, you can click on an unoccupied place, hold the mouse button and move around to navigate within the panel. You can also use your mouse wheel or swipe with multiple fingers on your touchpad to zoom in and out.

Create a new scenario tree by clicking on "New":

The following dialog comes up: 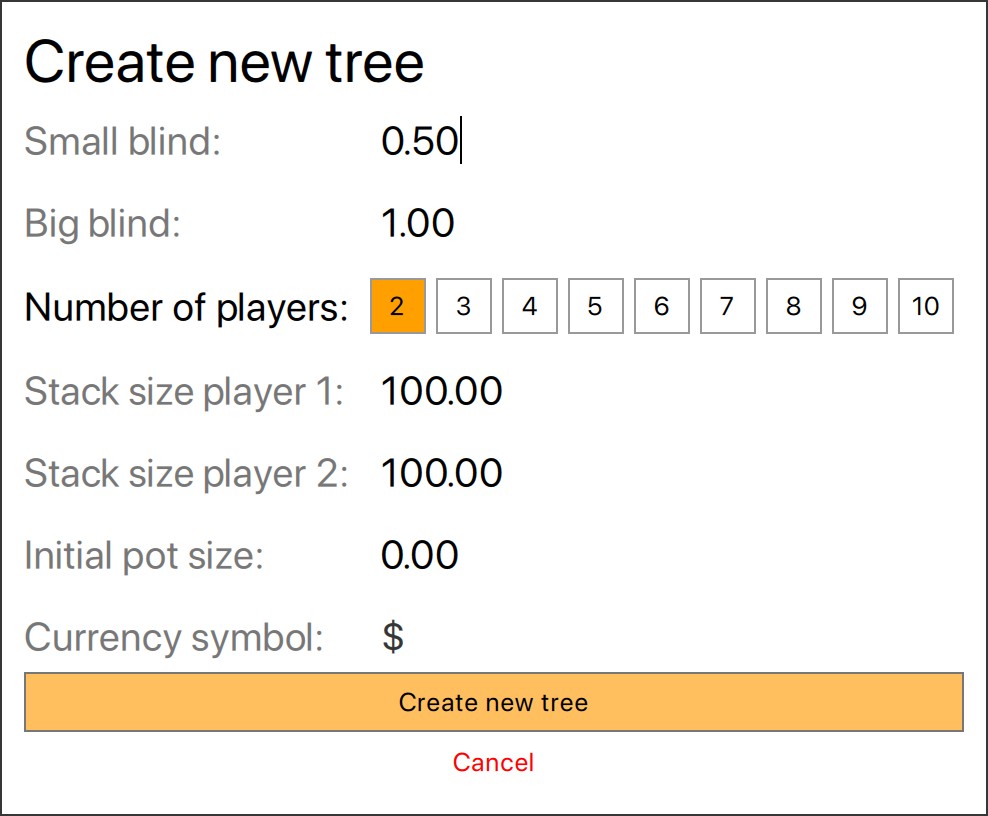 You can add a different currency symbol if you want to. It is also possible to leave it empty if the currency does not matter to you or you work with big blinds instead of $/€/¥/... amounts.

When you have created a new expected value scenario, you will only be seeing the root node with an annotation that tells you to add a new node:

When you hover the root circle, you will see a number of possible actions:

Adding an end node is not useful because it will end the the entire scenario very early. You can choose to add a board card node, where you can enter a (potentially random) flop, turn, or river. You can also add a player node which will then start a preflop action. In the following, we will provide further details for all of these nodes.

If you start an expected value tree with an action, it is assumed that a preflop scenario is created. PokerRanger needs you to provide ranges at the first player node and that preflop actions always start with small blind (SB). For example, let's start with a SB: 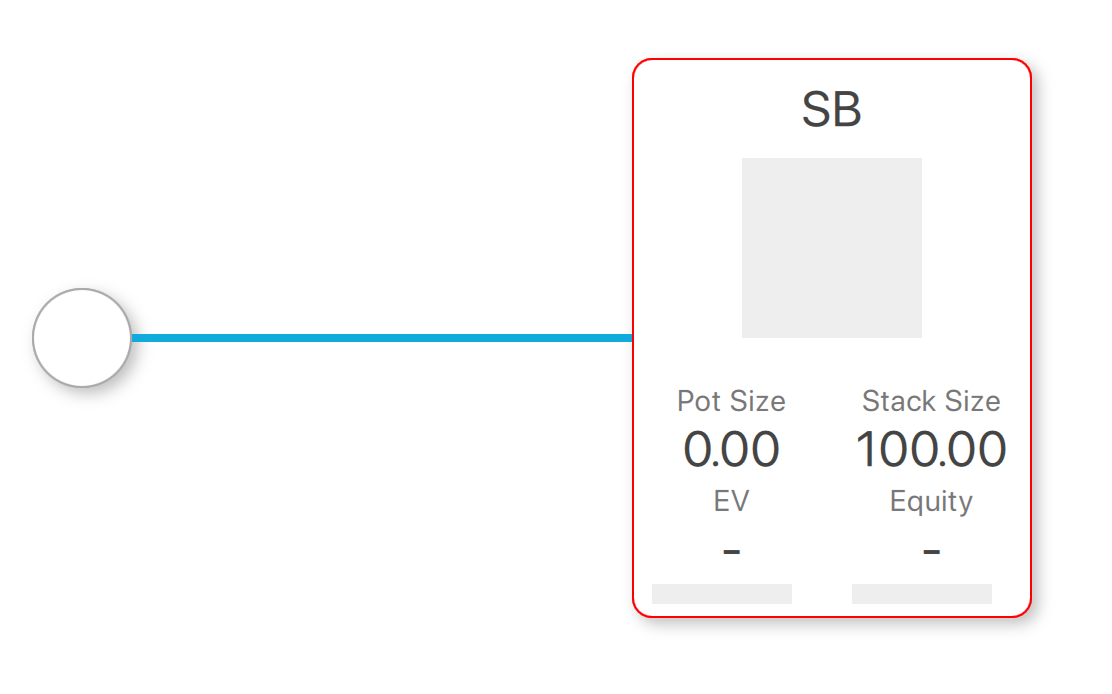 The red border tells you that the whole poker scenario is not yet complete and cannot be calculated. Pot size refers to the current pot size, so 0 for having a preflop scenario before the small blind is set. In this case, stack size refers to the initial stack size. When there have been more actions, "stack size" will always tell you how much money the player has left at this point in time. EV/Equity will tell you the expected value and equity for this particular action. They will be filled when the evaluation is finished that you can start by clicking the "Evaluate" button once you have a complete scenario.

When you hover the player node, you will see the options to add follow-up nodes. You will also see a quick view of the range (in this case of SB's initial range): 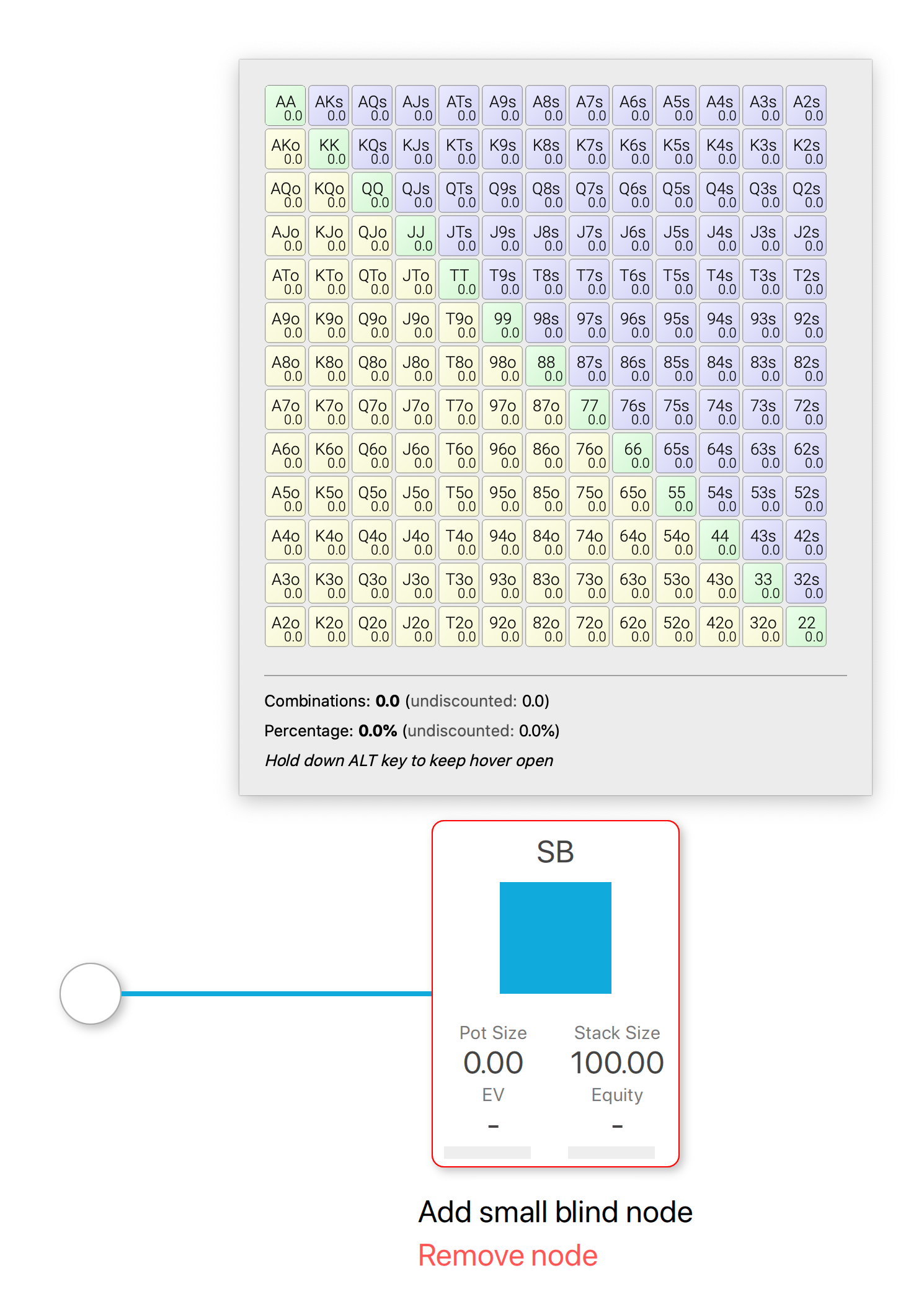 You can either hold down ALT to set SB's initial range directly in the popup or click on the range button. Clicking on the range button will open a hand range manipulation dialog that provides you all the advanced options of this dialog. Important: You are only able to set ranges in player nodes for the very first player node. After that, you can only define ranges in action nodes. An action node might be a "bet/raise node", "call node", or "fold node". The process in PokerRanger is to define which portion of a range a player bets/raises, calls, or folds with. For example, if Hero has an initial range of 22+, he could raise with TT+ and call with 22-99 (just to make up some ranges, this does not make sense in most real scenarios). If you follow up on the raise node, all follow-up actions will assume that Hero has TT+, so that it does not make sense to narrow this range down on later Player nodes. For later actions, you can then split up TT+ further or just let him go to showdown with this range. This might sound a bit confusing for now, but no worries: It will get much clearer soon, especially when you try it out yourself.

In this particular case, you can only remove the "SB" node or add a "small blind node". This is because the only option for SB to play at the very beginning of a poker hand is to post the small blind.

So, preflop the actions begings with SB setting the SB and BB setting the BB. Adding a player or "small/big blind node" is always just one click and PokerRanger automatically assumes that the whole range is used. This will look as follows:

So, the node at the very right is the player node of "SB" again because we have a heads-up (HU) scenario. If there were more than two players, it would be someone else's turn, of course. The pot contains 1.5 now (small blind of 0.5 + big blind of 1.0). Since SB has already set 0.5, his remaining stack size is 99.50. 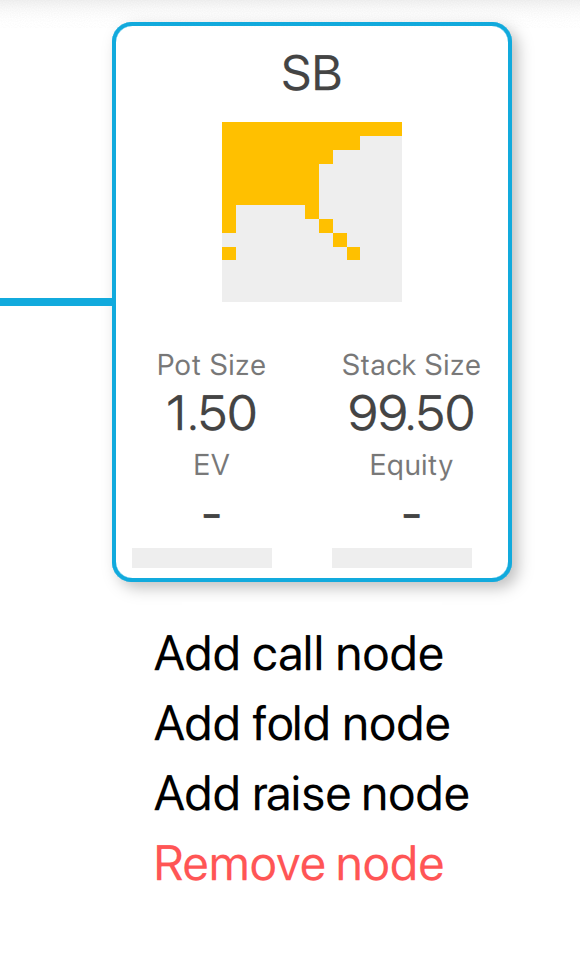 SB can now decide to call, fold, or raise. Of course, he could call with some hands, fold with others, and raise a third portion of his range. If a player node has a follow-up node, you can still hover the player node to add more follow-up nodes. In this example, we will add a fold, call, and range node with different portions of the range. This looks like this:

We add details to all of these three nodes in the following.

Apart from the small blind/big blind node, you can set a portion of a range with which this account will be accomplished. For example, for a fold node it might look like this: 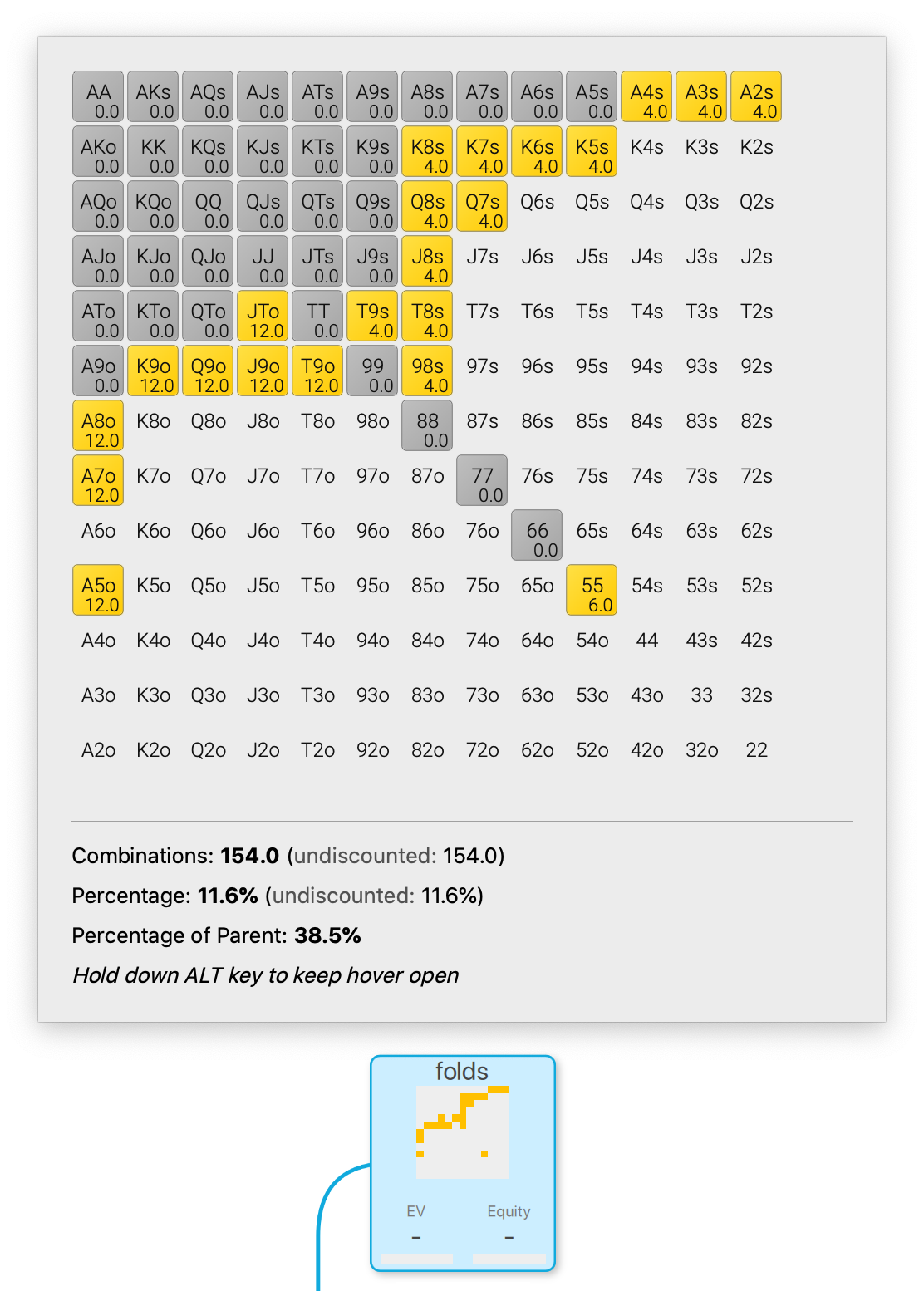 The player folds with 154 combinations which is a 11.6% range and represents 38.5% of the whole player range (that the player still has at this point in time). The orange hands belong to the fold range. The greyed out parts belong to the parent range (but will not be folded). The greyed out hands might appear in the calling or raising range. You might use the hand range manipulation dialog to add all remaining hands that are not selected (and not greyed out) at all. 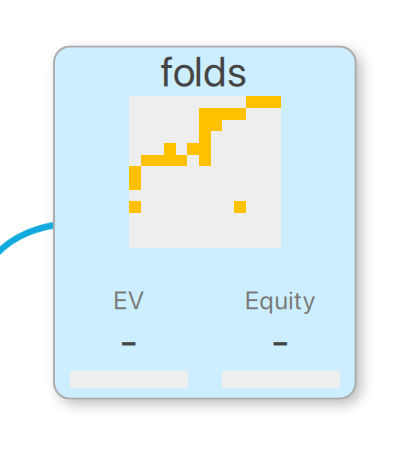 In this node, you can merely define what portion of the player's range is folded. You can do this by clicking the grey box (with orange items) to manipulate the range in PokerRanger's hand range manipulation dialog or by hovering the grey box, pressing ALT and selecting/unselecting the items directly in the popup. 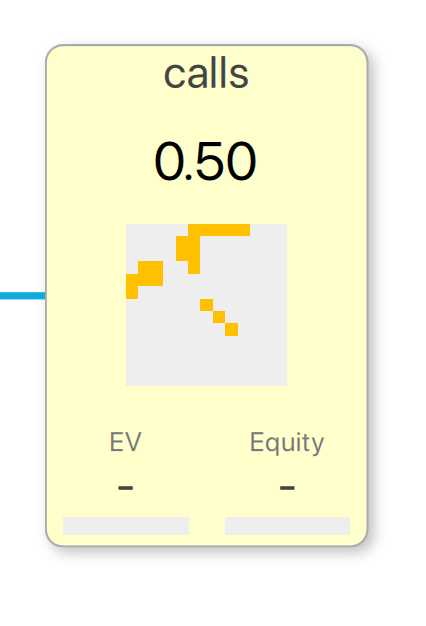 The aggressive character of the bet/raise node is illustrated by red color:

In addition to setting the range, you can also change the "raise to" amount by clicking on the number: 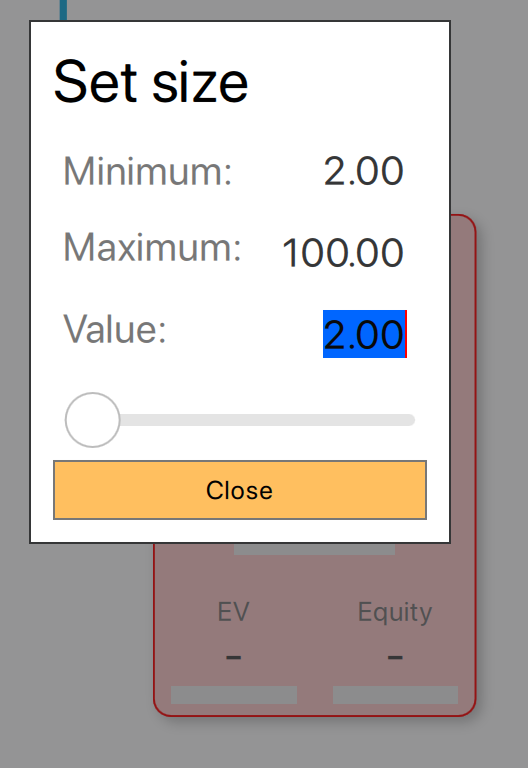 The raise size is always capped by the amount left that the Player has. If you would like the Player to go all-in, just move the slider to the very right. From below, the raise size is limited to the minimum amount, which might be the big blind (in the case of a bet) or the last "raise to" size plus the last "raise by" size. It is not possible for you to set a size that No Limit Texas Hold'em does not allow.

Like most of PokerRanger's dialogs in the "expected value view", you can close the window by clicking "Close" or using the escape button on your keyboard.

If all of the actions on one street or done, you can either stop the action (for example, if all players are all-in or if you would like to just assume that everybody checks until showdown) or add a board card node to enter the next street. You can also add a board card node directly after the root node to start your analysis at a specific street. It might make sense to add dead money in this case (which is the initial pot size).

In the case of a board card node, you will just see the cards, which can either be particular cards, random cards, or a mixture:

You can change the cards by clicking on any of the cards. This opens a dialog: 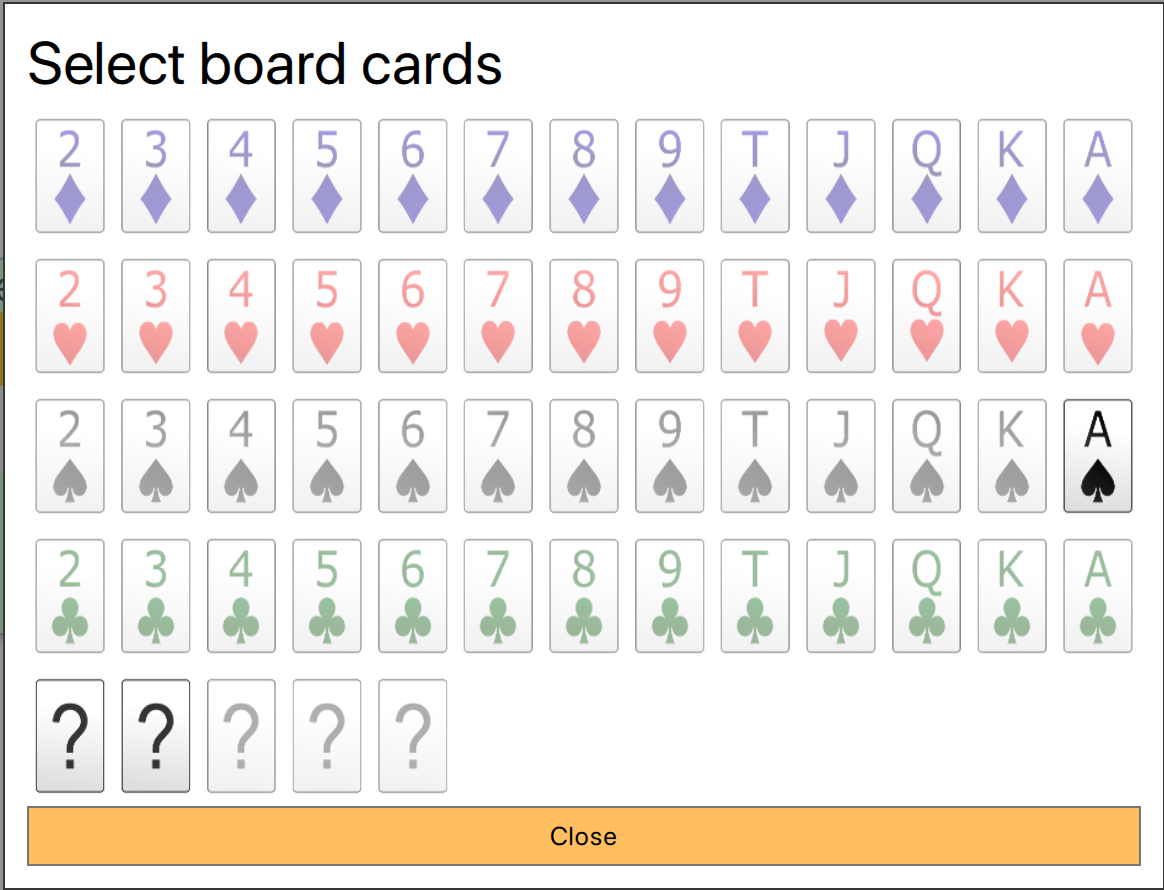 Cards that are already selected on a previous board are greyed out here. A random card is represented by the "?" symbol. A board card node can either be followed up by another board card node, player node, or board evaluation / end node.

Each branch of a scenario tree needs to be finished by a board evaluation / end node. This tells PokerRanger that the action has finished here. This node can only be set if all actions of a street are finished. For example, if one player bets on a flop, then all players need to either raise, call, or fold to that (and in the case of a raise, all players need to react again, of course). But also if one player checks, all other players need to do anything. It is possible, though, to not add any player after a board card node. Then, PokerRanger assumes that all players will check. An end node just looks like the root node but at the right end of the tree: 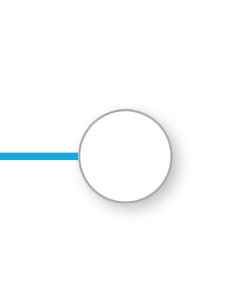 If any branch of PokerRanger does not have an end node, PokerRanger will complain when hitting the "Evaluate" button: 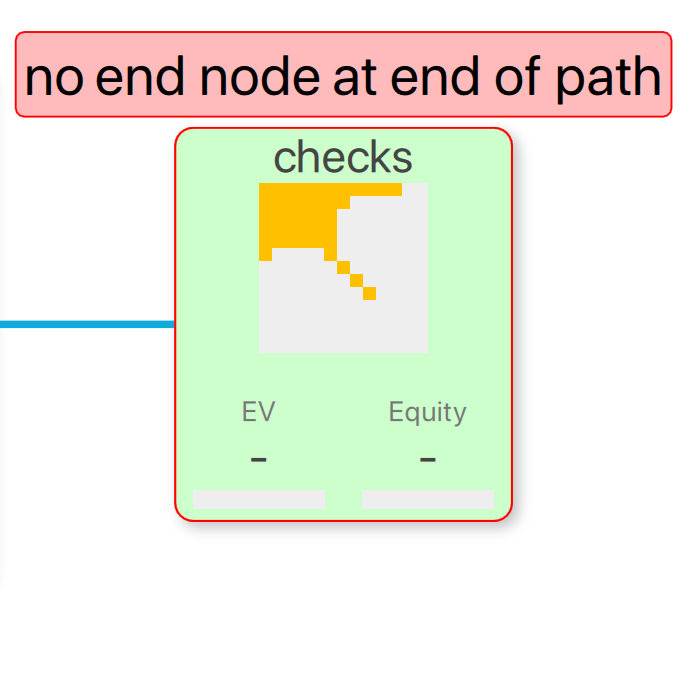 If you evaluate a tree, PokerRanger will start a monte carlo simulation over all nodes and will give you live updates all the time. With more time, the precision increases although it usually does not change much. You can observe the fluctuation of the numbers to estimate how much the numbers will change later. This allows you to create very complex scenarios and get a fast overview of results after a short amount of time.

We will analyze a simple action sequence to describe the values that you can see in a tree once you have hit the evaluate button:

In this example, we start the action at a flop of AcJs9s with deadmoney of 10. In this setting, it might be simplest to start at the right. SB has AdKd with 85.46% equity (top pair + nut flushdraw). BB has TT with 14.54% of equity because of set and backdoor straight possibilities.

You can observe these equities in the both the player and action nodes. If you do not have multiple actions after a player node, then the equities match. But if, for example, BB had a larger range and called some part and raised some part, there would be two different ranges and we naturally would have different equities. The player node would then show the range-weighted equity, so the calculatory correct equity.

Of course, PokerRanger also works fine with multiway ranges, considering different stack sizes, multi-way multiple-split pots and all other scenarios that might occur in Texas Hold'em games. You can design every scenario that you would like to analyze and find out whether or not your actions are +EV or -EV.

Oftentimes, you would like to analyze a scenario that you have played on a real table. In this case, just click on the "Import" button in the hand history view: 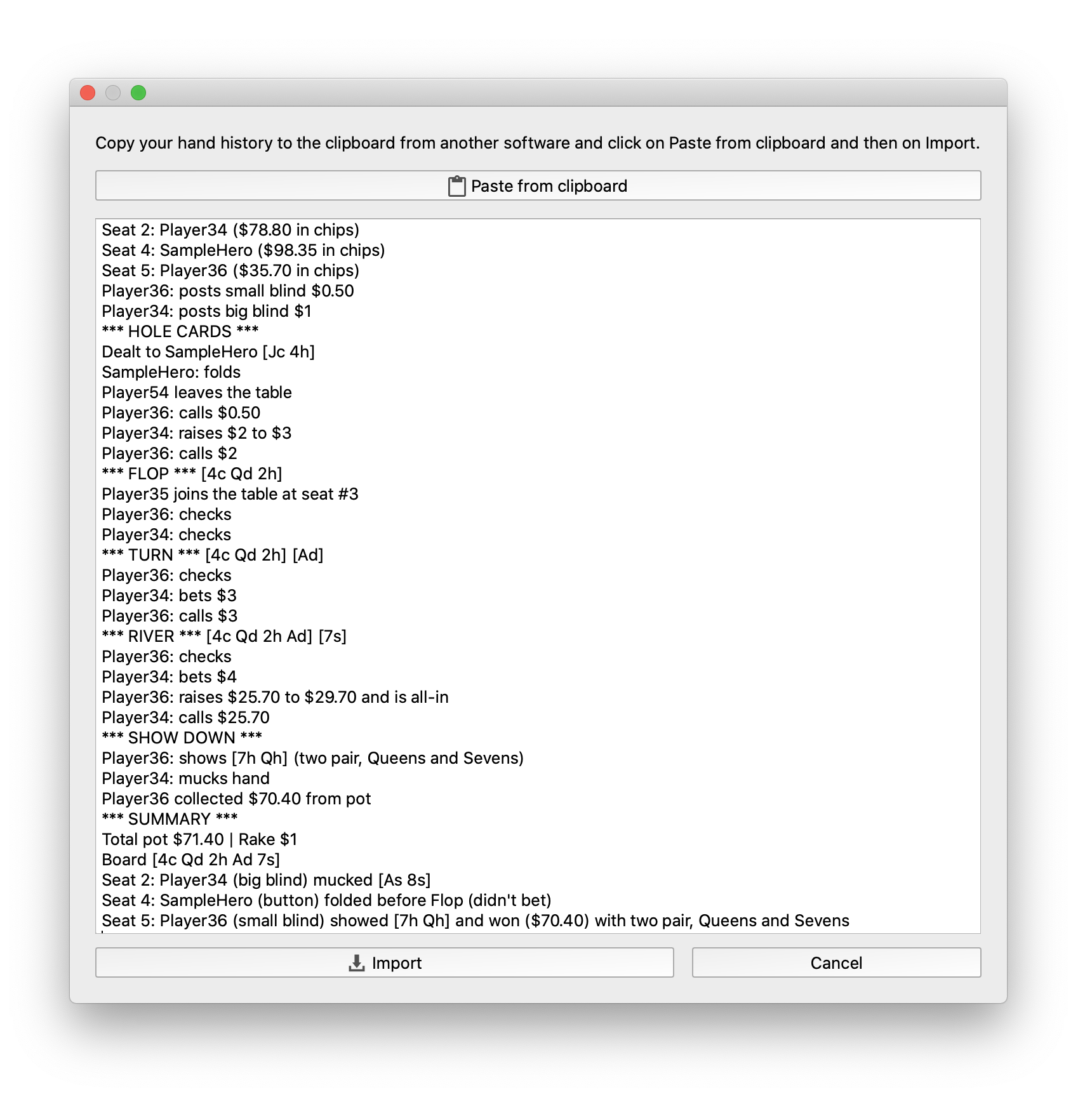 So, this was a short introduction into PokerRanger's expected value trees. If you would like to have more features, please let us know. We put a high focus on features that are wanted by our customers. Our mission is to support our customers in improving their game as best as possible, so please: Spam us!

If you have read all through that article, kudos to you! We wish you a lot of fun when applying your new knowledge and playing around with PokerRanger.